Take Ganesh for example. Here he is eating a basket of sweets. Ganesh was not the God of Fast Food as you might think. He is the God of beginnings.

"A legend explains why Ganesha is worshipped before any other deity or prior to any important event. It happened that Shiva asked Kartikeya and Ganesha to circle the world and return. Kartikeya hurried off on his peacock, but Ganesha walked around Shiva and Parvati. He explained that for him, his parents constituted the world. Pleased, Shiva granted him a boon, saying that before undertaking any important task, people would pray to Ganesha.

Ganesha's mouse, by gnawing its way through everything, is said to symbolise the god's ability to destroy all obstacles. " 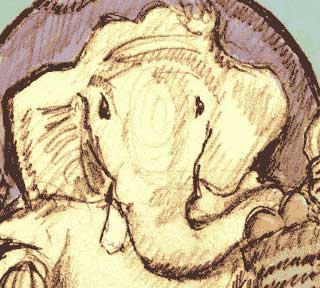